The Sikh Rehat Maryada document is an important document when studying the Sikh faith. Since it was first made in 1936, Sri Akal Takhat Sahib has used this document as an official reference for Sikh matters and as a standard for the protocol, procedures and conduct of religious duties at the historic shrine. The same document is used and propagated by all Gurdwaras and shrines under the management of Shiromani Gurdwara Prabandhak Committee, the largest Sikh representative organization, as well as other major Sikh institutions and Gurdwaras.

“a collective work that scholars, intellectuals and religious personalities during the start of the 20th century contributed towards. It was a collective attempt to standardise a minimum baseline code of conduct for the Sikh Panth and stop the non-Sikh influences that had entered Sikh institutions and the daily lives of Sikhs.”

A valid question would be, what traditions or code of conduct was followed in historic Sikh shrines prior to this document being formed. In accordance to Bhai Manvir Singh Khalsa (Ibid):

“Prior to 1927, when the first sub-committee was appointed to work on drafting the Sikh Rehat Maryada document, there were many respect-worthy religious schools or groups that claimed to follow the code of conduct that had been passed down generation to generation from Guru Gobind Singh Ji; however, none of the prevalent traditions and views matched identically. In regards to some issues and observances, there was a great divide, and even contradictions with Gurbani, yet all claimed to follow the authentic traditions ordained by the Sikh Gurus. The situation worsened to the extent that idols of Hindu gods were installed around the edges of the Sarovar (holy lake) of Sri Harmandir Sahib, Amritsar. Moreover, the Mahants (headmen) refused to initiate those deemed as low-castes in accordance to Hinduism into the Sikh fold in the same Amrit Sanchaars (initiation ceremonies) that were held for the so-called high castes. The purity of Sikh teachings and code of conduct had been lost with the growing influence of Hinduism on the Sikh religion at the time.”

The main source of guidance for any Sikh is Sri Guru Granth Sahib Ji. In addition to this, Sikhs since the time of the Gurus have also taking inspiration and guidance from the writings of the Tenth Guru, Bhai Gurdas Ji, and Bhai Nand Lal Ji. Bhai Manvir Singh Khalsa (p. 2-3) quotes Bhai Kahn Singh Nabha (Gurmat Martand, Vol. II, p. 796-97) as listing 24 manuscripts that are used as Rehatnamas or letters of code of conduct that Sikhs based their religious discipline.

Bhai Nand Lal Singh Ji (1612-1715), also known as Bhai Nand Lal Ji before becoming Amritdhari, was an Afghan Sikh who was a great Persian and Arabic scholar. He was the ‘Crown Jewel’ of Guru Gobind Singh Ji’s court. He was one the 52 poets of the Guru’s court and was a scholar and perfect devotee of the Guru.

Bhai Daya Singh Ji (1669-1708) was the first of the Panj Piaare to offer his head to the Guru on Vaisakhi day in 1699. He was a respected scholar. Due to his wisdom, faith and courage. Guru Gobind Singh Ji chose him to deliver his letter, the Zaffarnama, to Aurangzeb.

Bhai Prahlad Singh Ji was a Persian and Sanskrit scholar born in a Brahmin family that embraced Sikhi.  He was a court scribe of Guru Gobind Singh Ji.

Also known as Param Sumarg is an ancient manuscript. The author is unknown. According to Prof Piara Singh Padam (Rehatname, p. 49) it seems it is written by a good scholarly Sikh. It is particularly significant as it describes each rite of passage and ceremony of a Sikh’s life. Prof Padam suggests that it was written around 1765 during the height of the Misl period as it describes in one part how to be a good ruler. 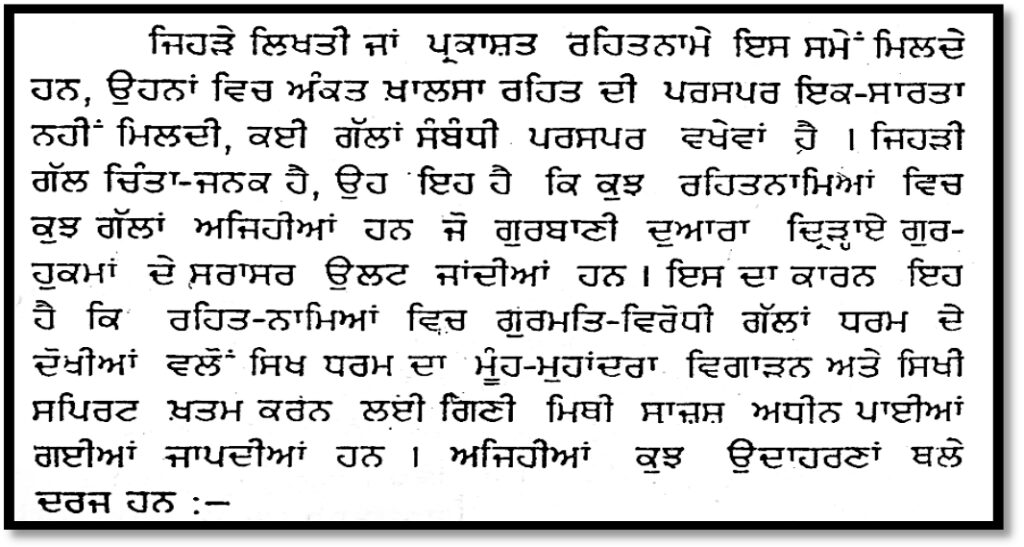 Manvir Singh Khalsa (p. 4-5) brings to the attention of readers some examples of how historical Sikh sources have been adulterated and clearly contradict central Sikh teachings contained in Sri Guru Granth Sahib Ji:

“In the last part of the night (Amrit-Vela) wake up and consume tobacco. Then bathe or wash your hands, feet, and face.”

Bhai Manvir Singh Khalsa (p. 5) comments on the above quotations by saying:

“It is clear from the above that Rehatnamas have been manipulated and tampered with. All other historical texts had different versions. A Rehatnama is something that explains Rehat as defined by Gurbani, and therefore, someone with knowledge of Gurbani would be able to identify adulterations and corruptions in the historical Rehatnama literature.”

“A Sikh is not obliged to accept anything that has been written down in a Rehatnama which contradicts Gurbani. At the end he concludes that the final say on Rehat is Gurbani contained in Sri Guru Granth Sahib Ji and Dasam Granth.”

No comments to show.